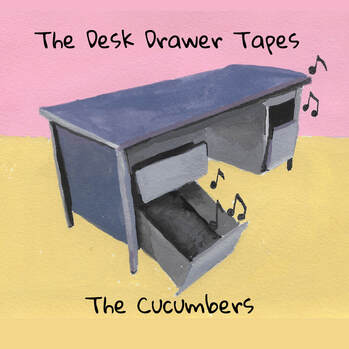 “The Desk Drawer Tapes” is a collection of previously unreleased songs recorded by The Cucumbers from 1988 to 2005.

“These recordings literally came out of my top desk drawer,” says Deena. Like many others during the COVID lockdown months she turned to the long put off tasks of cleaning and organizing. “Instead of finding old papers and pencils to discard I found old recordings.”

“There were cassettes and disks with tracks we’d nearly forgotten about, a bunch of them finished recordings, fully produced and some of them even mixed,” says Jon. “Why didn’t we release them at the time? Some were probably too out there for whatever label we were on. Some of them didn’t fit with the other songs we were doing at the time. Some of them, we don’t remember why.”